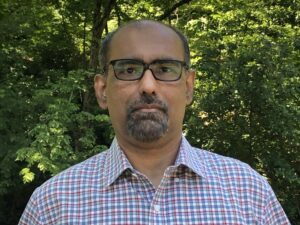 Sarosh Koshy, Ph.D. is a researcher with more than two decades of activist experience in the field of social movements and faith-based social groups both in India and the United States. From 2006 to 2011, Koshy has served the National Council of Churches USA (NCC) as Program Specialist in the departments of Interfaith Relations and Faith & Order. As an auxiliary position from the NCC, Koshy served as Executive Director of Religions for Peace-USA (RFP) from June 2010 to March 2011. Along with fulltime work at NCC and RFP, Koshy earned his Master of Arts degree in Christian theology from the Union Theological Seminary in New York City, and his PhD from Drew University. A book formed out of his doctoral dissertation is currently progressing well in the publishing process and is expected to be published by Fall 2021.

Before coming to the United States in 2005, Koshy was actively involved in the movements of the excluded, in both the church and society in India. Koshy’s path of Christian discipleship has moved along the interface between the social movements and Christian ecumenism in India. The faith and vision instilled by the Mar Thoma Church youth movement and the Student Christian Movement of India have inspired him to work with groups and institutions associated with the National Fishworkers Forum, the Narmada Bachao Andolan, the Dalit, the Environmental and other people’s movements in India. For more than a decade, Koshy has coordinated a youth-student program from the residence of Dr. M. M. Thomas, one of India’s most renowned Christian theologians. From the late 1980s to 2005, Koshy assumed many roles in India at the state and national levels—student organizer, activist, editor, writer, researcher, and interfaith activist. Koshy also had a significant role in organizing major events at the Asia Social Forum of 2003, and the World Social Forum in 2004.

Join The BTS Center and @LoorzVictoria for a retreat exploring Wild Spirituality this Friday, 8/6. Register: https://thebtscenter.org/wild-spirituality-restoring-the-great-conversation/

We are excited to announce the dates and theme of this year's Convocation 2021: "We Are God's Soil: Spiritual Leadership in a Climate-Changed World," coming up Sep. 30 - Oct. 1, with keynote speaker, @RevMariama! Learn more about Convocation and register: https://conta.cc/3zJElS2