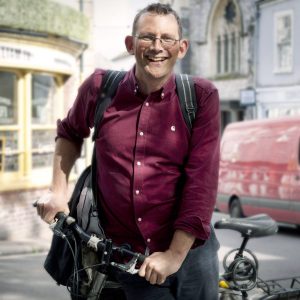 Rob Hopkins is a co-founder of Transition Town Totnes and Transition Network, and the author of several books, including From What Is to What If: Unleashing the Power of Imagination to Create the Future We Want. He presents the podcast series “From What If to What Next” which invites listeners to send in their “what if” questions and then explores how to make them a reality.
In 2012, Hopkins was voted one of the Independent’s top 100 environmentalists and was on Nesta and the Observer’s list of Britain’s 50 New Radicals. Hopkins has also appeared on BBC Radio 4’s Four Thought and A Good Read, in the French film phenomenon Demain and its sequel Apres Demain, and has spoken at TEDGlobal and three TEDx events.
An Ashoka Fellow, Hopkins also holds a doctorate degree from the University of Plymouth and has received two honorary doctorates from the University of the West of England and the University of Namur. He is a keen gardener, a founder of New Lion Brewery in Totnes, and a director of Totnes Community Development Society, the group behind Atmos Totnes, an ambitious, community-led development project. He blogs at transitionnetwork.org and robhopkins.net and tweets at @robintransition.

As we move into the holiday season, we look forward to two upcoming events: Lament with Earth and Stories of Grief and Courage. We also have exciting opportunities for learning on the horizon, with two unique courses coming in 2022. Read more here: https://conta.cc/3oOtPVL

Join us on Friday, November 19, when Rev. Allen Ewing-Merrill will share a lunchtime Fireside Chat with Victoria Loorz, author of Church of the Wild: How Nature Invites Us into the Sacred. Learn more and register: https://thebtscenter.org/a-fireside-chat-with-victoria-loorz/

Our Executive Director, Allen Ewing-Merrill writes about a special programmatic attention to ecological grief and invites you to participate in one of two online groups that we're offering in Nov., Words for a Dying World: Book Study Group and Stillpoint. https://conta.cc/3BMiomJ