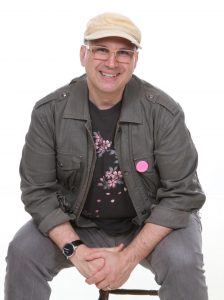 After spending 17 years and over $30,000 on three continents attempting to “de-gay” himself through conversion therapy, Peterson Toscano came out a quirky queer Quaker concerned with human rights. He asks himself and his audiences unusual questions: Who are the gender outlaws in the Bible? What is a queer response to climate change?  What is the role of comedy when addressing trauma? His film, Transfigurations—Transgressing Gender in the Bible explores the stories of gender non-conforming Bible characters; his Bible scholarship has been featured in The Oxford Handbook of the Bible in America.

Peterson has been featured in People Magazine, The Times of London, the Trya Banks Show, and NPR Morning Edition. In addition to his original performances, Peterson produces multiple podcasts including Citizens Climate Radio, Bubble&Squeak, and the Bible Bash Podcast. In much of his work, Peterson helps people see climate change from fresh angles while stirring up empathy towards those most affected. Wherever he goes, he brings stories of determination, resiliency, and a cast of comic characters. He lives in Pretoria, South Africa with his husband, Glen Retief.