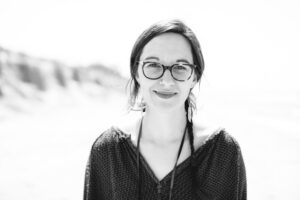 Kaitlin Curtice is a Native American Christian author and speaker. As an enrolled member of the Potawatomi Citizen Band and someone who has grown up in the Christian faith, Kaitlin writes on the intersection of Indigenous spirituality, faith in everyday life, and the church.

Her first book, Glory Happening: Finding the Divine in Everyday Places, was published with Paraclete Press in 2017. It is a series of fifty essays and prayers focusing on finding the sacred in everyday life. Kaitlin’s new book NATIVE: Identity, Belonging, and Rediscovering God, came out in May 2020 with Brazos Press, and was named by Publisher’s Weekly as a Religion and Spirituality book to watch for.

Kaitlin has contributed to OnBeing, Religion News Service, USA Today, and Sojourners, among others, and she was interviewed for the New Yorker on colonization within Christian missions. In 2018 she was featured in a documentary with CBS called “Race, Religion and Resistance,” speaking on the dangers of colonized Christianity.

Kaitlin travels around the country, speaking on faith and justice within the church as it relates to Indigenous peoples. She has been a featured speaker at Why Christian, Evolving Faith, Wild Goose Festival, The Festival of Faith and Writing, and more.

She also occasionally writes at her blog, kaitlincurtice.com.

Check out my latest #podcast https://www.podbean.com/eau/pb-eykiy-1255fac on #Podbean

On March 24th, in collaboration with Maine Council of Churches, we'll host an online screening of the powerful film Truth Tellers, followed by a live Q&A with some of the artists and activists featured. Please join us! For more info and to register: https://thebtscenter.org/truth-tellers-online-film-screening-and-live-qa/