We welcomed all for this opportunity to meet members of The BTS Center team, and we were grateful to partner with Alumni Co-Conveners Rev. Annette (’08), Rev. Tara Olsen Allen (’10), and Rev. Doug Clark (’74). 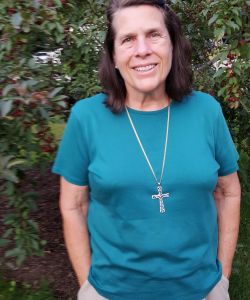 Rev. Annette Mott worked as the Resource Center Director, and later as the Director of Local Church Resources, for the Maine Conference UCC for 26 years as a lay worker. She graduated from Bangor Theological Seminary in 2008, was ordained in the United Church of Christ, and served as an Intentional Interim Minister at six different Maine UCC churches. She retired in August of this year. 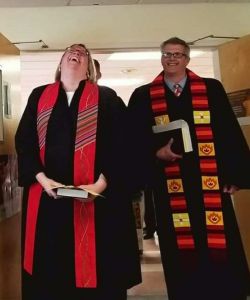 Rev. Tara Olsen Allen serves as Pastor of Pilgrim United Church of Christ in Brentwood NH and has worked with the UCC at the local, association, and national levels. She recently served a church in Beverly, MA as Pastor for Congregational Life. Tara is a “born and bred UCCer” who grew up in a small town in MA. Tara received her Master of Divinity from Bangor Theological Seminary while at the same time pursuing a certificate in Youth and Theology from Princeton Theological Seminary. In her spare time, Tara enjoys listening to live music, especially from her husband Daemian, who plays a variety of instruments. 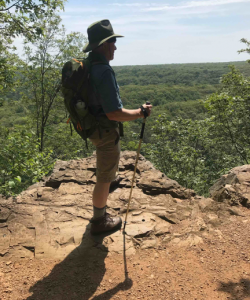 Rev. Doug Clark, a 1974 graduate of BTS, was ordained in 1975 and served UCC congregations in Maine, Massachusetts, and Southern California as a settled pastor. He transitioned to intentional interim ministry in 2001 and served congregations in the Washington, DC metro area and in Connecticut until his retirement in 2017. He is married to the Rev. Dr. Mary Moschella, who is the Roger Squire Professor of Pastoral Care at Yale Divinity School. Doug is passionate about the role of spirituality in addressing the climate emergency. He is the co-host of a podcast on creation care and climate justice with Jenna Van Donselaar, a recent graduate of Yale Divinity School and an activist with Young Evangelicals for Climate Action.

Click here to return to the main Convocation 2021 web page for more information about all Convocation events.