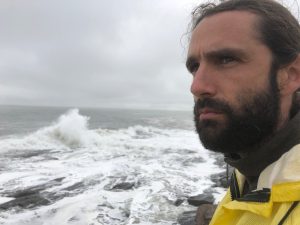 Jay O’Hara is a Quaker from Cape Cod. After experiencing his “climate wakeup” moment in 2006, he took volunteer leadership in the secular climate movement in Massachusetts and founded Climate Summer, a transformational program for student climate activists. After experiencing burn-out, he turned to his faith tradition to provide a new framework for an effective and faithful response. Called to bolder action in 2013 he, along with Ken Ward, blockaded 40,000 tons of coal destined for the Brayton Point power plant with their small white lobster boat named the “Henry David T” – the Lobster Boat Blockade. The ensuing legal proceedings garnered national attention, and the plant closed its doors in 2017. In 2016, he supported the tar sands “valve turners” action across 4 states which shut down 15% of the US daily oil supply. Jay has played a leading role in the No Coal No Gas campaign to shutter the last big coal fired electrical generator in New England. He is a co-founder of the Climate Disobedience Center and is recognized by his Quaker meeting to serve as a traveling minister in New England. He currently lives in Portland, Maine.